ECONOMY AND THE SCARS OF TIME IN MY HOMELAND RWANDA .

Bikindi, seated at the witness stand in the center. I was listening to an inane conversation about costumes versus uniforms, translated carefully and rapidly into my headset. Fifteen minutes later, I left the room and had pastries and coffee in the cafeteria. Is this justice? Is it really? Nearly a million people are dead. Will the conviction or acquittal of this one man, who has the confidence to sit in this place and quibble over semantics, really matter? The justice of this court can only be, at best, symbolic.

And it is not that the symbols do not matter; they do, tremendously. Of course it matters that this trial is taking place; of course it matters that the rules of law, which are all we have, are being followed. Of course we have a desperate need for symbolic meaning, and this court offers that to the world, to humanity, in the best way that it can. If it is this or nothing, semantics or silence, I choose semantics. But it is not enough. It can never be enough. The only justice that would be enough is too great for me to fathom. 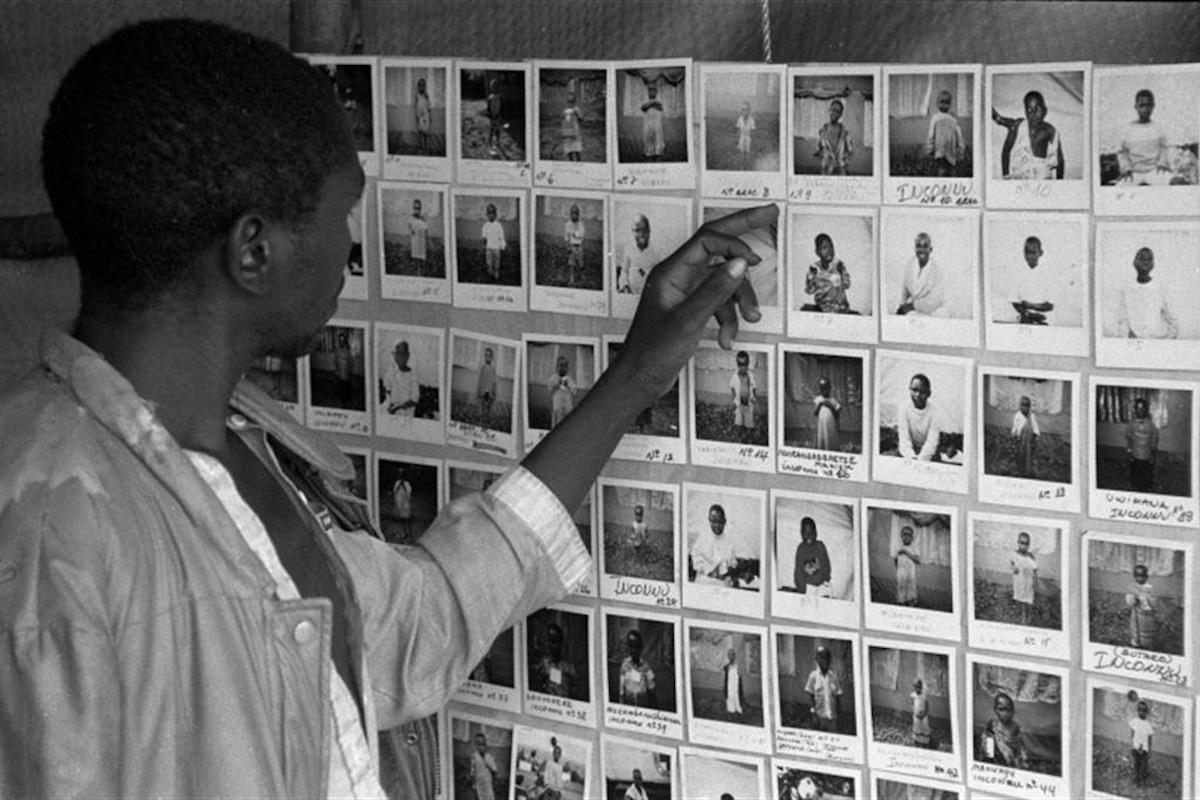 Every person who remains silent now, when it is still going on. The scale of guilt, of sin, is too great. No human justice can ever be great enough to encompass it. The blood of our brothers and sisters is crying out, to whatever God can hear, from the ground where our apathy, our greed, our silence, has spilled it, not just in Rwanda but in Iraq, Afghanistan, Guatemala, El Salvador, Vietnam, Laos, Bosnia, Germany, Poland, the United States—everywhere. No justice will ever be enough.

I am left to wonder what, then, could possibly be great enough. We are here, and we have to survive somehow, with this burden. What can we do? I come to mercy—forgiveness—love. Would I still use these words if they had? All I know is that for now they are the only words I have. What else is there? Perhaps we can think about the words of Mr. Adama Dieng, the registrar of the tribunal.

It is the only hope I have for the future. I hope that we can strive to reach the power behind the words of mercy, and love, and forgiveness; to find out what it means and to live it. We can strive to hear the voices that are crying out. We can strive to change those things that hurt us, that take away our humanity.

I see no other way to live. Throughout the program, we visited refugee camps, met with organizations working toward reconciliation, and lived with families who had been affected by conflict. My host family in Rwanda fled to Southern Uganda during the genocide. My host family in Uganda lived in an IDP camp for seventeen years where their youngest son, my host brother, was kidnapped.

He was forced into child soldiery for four years before escaping. These interactions taught me firsthand that there is no one more forgotten or neglected than an innocent civilian who is caught in the throes of violence. Sadly, often enough it seems that the same disregard applies when it comes to justice.

While at the courts, we spoke with Mr. Phillips tried several landmark cases during his time at ICTR, including a case involving Pauline Nyiramasuhuko, the first woman to ever be tried for crimes against humanity and the first woman to ever be charged with using rape as a crime of genocide. Hearing about the ICTR from a judge who had been involved from the beginning shed light onto the extreme importance of an international code of justice.

The courts were an important step in establishing accountability and an international standard of acceptable behavior. They took strides to define rape as a tool of genocide, held key players responsible for organizing crimes during the genocide, and began the long process of overcoming an international indifference to genocide. However, Mr. Phillips also brought attention to the many intricate steps involved in actually determining superior responsibility, and in finding and keeping the witnesses necessary to prove someone guilty. These challenges are just a few examples in the string of difficulties that face the ICTR.

While sitting in on cases was fascinating, it was interacting with people outside of the ICTR that really provoked questions of what justice means in the context of genocide. Three big questions stood out at the time. First, who actually benefits from the form of justice given by ICTR? Who does that justice serve? In the case that I sat in on, the room for observers was completely full of people — and every single one of them was white.

When talking about this later, my host father said that in Rwanda, people do not feel connected to the courts or know the outcomes of them because Arusha is too far away for Rwandese to travel to, and translated transcripts are not sent back or distributed.

With most of the people viewing the cases not part of the actual genocide, whose justice was it really? I wondered about my host family, and the kids I had met at refugee camps in Uganda. Does locking perpetrators up behind bars in these faraway cases actually mean anything to them?

Does it give them closure or any sort of benefit? Maybe in the long term — with the conflicts in Eastern and Central Africa becoming increasingly interconnected, arresting the ringleaders of one genocide might very well help to prevent the next. But what about the short term? What about an apology or assistance for the boy I met in an orphanage whose parents were killed in front of his eyes at the age of 4?

He has lived his life as an orphan since then. What about the young woman who was raped, infected with HIV, and is now an outcast from society because the rape was perceived as her fault? They are the ones whose lives were destroyed, not the international community. The kids in orphanages and refugee camps will most likely never physically see the men who organized so many crimes against them. Will they be able to come to terms with being orphans simply because the men who organized the massacre killing their parents are in jail?

What justice is served for every child who lost a parent, every family who lost years of life and education in a refugee camp, and every generation of lost children? Or can any system ever create adequate individual justice for what was lost? The Gacaca courts were an important step, but people still slip through the cracks.

My host sister was scoffed at when she tried to present her case of being raped because a. The second question that came up was who should be held accountable or tried for the crimes committed, and who gets to decide that?


My dad was a criminal military judge for 28 years. Growing up I always saw his work as clear-cut.

There were the good guys and the bad guys. The bad guys were always guilty. Sentencing them to years in jail was the clear solution. Those who were victims were therefore innocent, and could then live in peace when the perpetrators were imprisoned. But what happens once the distinction between victim and perpetrator is blurred, and the line between innocent and guilty is not so straight? The men and women in this camp dictated a completely different story of what had occurred during the genocide than that told by Tutsis. They also gave us a glimpse into the discrimination that currently faces Hutus today.

In their stories they focused much more on the long history leading up to the genocide — on the widespread massacre of Hutus in Burundi — on the RPF invasion of Rwanda in Those who fled the fire inside died by machetes outside. Alice lost some 26 family members, among the estimated 5, victims at the church. She hid in a forested swamp. By late April rebel Tutsi fighters led by Kagame had reached the capital and chased Hutus out.

Hutu troops began to flee to neighboring countries, and the violence spread, with killings carried out by both sides. On April 29, Emmanuel joined Hutu soldiers searching the countryside for Tutsis. The attackers blew a whistle whenever they found a Tutsi hiding. The murders began at 10 a. Alice had been hiding in a swamp for days, keeping out only the top of her face so she could breathe. That was where the Hutus found her. First they killed the girls.

When that was done, they came after Alice. She was sure she would die, but instinctively put up her arm up to defend herself. He sliced her face. His colleague pierced a spear through her left shoulder. She was bloodied, scarred, and missing a hand, yes, but not dead.

Alice fell unconscious, she says, and was found three days later by other survivors. It was only then that she realized she no longer had a right hand. In the months after the genocide, guilt gnawed away at Emmanuel. He saw his victims during nightmares. In , he turned himself in and confessed. His prison term lasted from until , when Kagame pardoned Hutus who admitted their guilt.

After he was freed, he began asking family members of his victims for forgiveness. He joined a group of genocide killers and survivors called Ukurrkuganze, who still meet weekly. It was there that he saw Alice , the woman he thought he had killed. At first he avoided her.

Eventually he kneeled before her and asked for forgiveness. After two weeks of thought and long discussions with her husband, she said yes. Josephine Munyeli is the director of peace and reconciliation programs in Rwanda for World Vision, a U. When one realizes how heavy it is the first thing they do to recuperate themselves is apologize. Although Rwanda has made significant progress since the genocide, ethnic tensions remain. Alice worries that some genocide planners were never caught, and that messages denying the genocide still filter into the country from Hutus living abroad.

A Letter to the Rwandan People – Great Lakes Voice

She believes remembrance is important to ensure that another genocide never happens. For Emmanuel , the anniversary periods bring back the nightmares. He looks like a man serving penance, who does not want to talk but feels he must. There are those up until now who participated in the genocide who deny they took part.