If God is Love, Why All the Pain?


Probably one of the greatest challenges faced by Christianity and Christians is the reality of evil and suffering. At times even great thinkers are baffled by the seeming contradiction between the existence of a loving God and the fact of evil. Upon the death of his wife, C. Lewis wrote, "Meanwhile, where is God? This is one of the most disquieting symptoms … But go to Him when your need is desperate, when all other help is in vain, and what do you find? A door slammed in your face, and a sound of bolting and double bolting on the inside.

Fortunately, Lewis came to grips with his grief and in the end realized that God not only exists, but that He is indeed all loving despite our sufferings. Still, for Christians and non-Christians evil and suffering are often at the forefront of our minds, particularly when we ourselves are suffering. How could a good God allow so much evil?

God is Love; Christ is Pain

Why doesn't He do something about it? Couldn't God have created a world without evil?


These are important questions and while we cannot solve them all neatly in one short article, we can address evil and suffering and begin to offer some possible solutions to the seeming dilemma. Solving the seeming contradiction between a loving God and the reality of evil is usually referred to as a theodicy. A theodicy attempts to solve the apparent tensions in what is often termed the problem of evil. But the problem of evil is really a series of problems.

Like many large problems, sometimes it is helpful to break them down into their components. Evil, you see, actually extends not only to the moral world, but also to the natural world. When human beings do bad things to one another, this is moral evil. But so-called natural disasters are often considered evil as well because of all the suffering they cause.

Earthquakes, tidal waves, floods, and so forth, are all examples of what might be termed natural evil. One helpful approach to solving the problem of evil has to do with defining evil.

How could an all-powerful, all-loving God allow evil to exist?

Christian thinker Augustine defined evil not as a thing in and of itself, but as a parasite on good. Something that is lacking is not a thing in itself.

How Can God Allow So Much Evil and Suffering? | Focus on the Family

For instance, if you have a hole in your jacket, the hole is not something, but rather is something that is lacking. Similarly, Augustine considered evil something that is missing. Indeed, it requires good to exist because it is a parasite. In this sense, Augustine defined evil as a privation — a lack of something — rather than a thing or substance. This solves some important criticisms.

How Can God Allow So Much Evil and Suffering?

If evil is not an actual thing, then God cannot be the author of evil. God is the author of good, but we make moral choices that result in evil. Atheists, skeptics and other critics of Christianity often argue against God on the basis of the reality of evil and suffering. But do evil and suffering really mean that God does not exist? Some Christians have responded by turning the skeptic's argument on its head. They do this by asking on what basis is something deemed evil? If there is some moral standard the critic is basing their position on, then the problem of evil becomes an argument for not against the reality of God.

After all, in order to call something good or evil, there must be an underlying standard of right and wrong. Theists argue that this standard is rooted in God and His nature. We know His moral law exists so we recognize the reality of evil and suffering. But unless there is a moral standard, we have no real basis for calling anything good or evil.

As we noted earlier, there's a difference between moral and natural evil. Moral evil is explained by the fact that human beings commit evil against one another. People lie, cheat, steal, hurt, and more. If God exist, because he is both all powerful and all good, he does not allow any utterly pointless pain and suffering, but ensures that all pain and suffering will result in an ultimate good.

God does exist. Therefore there is no utterly pointless pain and suffering from the perspective of belief in God. Here again, while we may never understand within our own lifetime and experience the ultimate point of some particular manifestation of pain and suffering, it doesn't preclude the possibility that there isn't an ultimate good.

Nor does it diminish the humanity and even validity of "grief" that we feel when we, or someone we know, suffers great pain or loss. It would mean, however, that while we justifiably grieve based upon our experience and perspective of pain and loss, we need not grieve without hope, even that hope that is based on belief in God! Interestingly, it is usually the people who are suffering who have the greatest belief in God, when the "problem of pain" is no longer academic. It is as if something within us clicks on when we suffer as to find God more believable!

Let us then consider the problem of pain from the perspective of belief in God, and especially how this perspective is vindicated in the narrative of both the Old and New Testament history of God's people! From the perspective of faith in God, in so far as God is both "good" and "powerful", we can say that God is the first and ultimate cause of all things whatsoever that come to pass such that if something does happen that seems from our perspective to be an utterly pointless manifestation of pain, by faith in God we can hope that "God will cause all things to work out for good Romans , 1 Peter , Hebrews Moreover, even as humanity is made in the image of God to both "will" and to act upon that will, it is entirely possible that what man intends for evil acts of murder for instance , God could, without violation of human freedom of will, act through this will for some ultimate good. 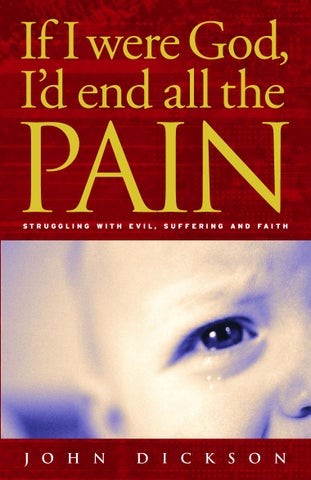 Take for instance the case of the Exodus in the Old Testament. The language of the narrative is clear. Pharaoh is evil in his malevolent actions in the oppression of Israel, even as God acts through Pharaoh's malevolent actions to do an ultimate good for Israel in giving them a promised land. Notice then this perspective in scripture:. Exodus So then [it] [is] not of him who wills, nor of him who runs, but of God who shows mercy.

Pharaoh is both, and at the same time, considered an evil person for his treatment of Israel, even as he is considered the "hand of God" in terms of the ultimate good that God produced through Pharaoh's actions. While it can be said that ultimately, God's power was operative as to "harden" Pharaoh to do the things he did, it is also the case that Pharaoh was acting freely so as to not implicate God in the evil!

This is a mystery ultimately which of course if there is a God, it should not surprise us that we can't fully understand Him , but it has to do with the idea that while there is human freedom, it is not an absolute freedom, but rather a freedom relative to the absolute and ultimate freedom of God. How all this works out in our present discussion is that what a person might intend for evil, it is said that God is causing an ultimate good. Of course, another example of ultimate good through seemingly pointless suffering at the hands of evil actions is the story of the crucifixion of Christ on the cross.

This is the point of Peter in his sermon: This man, handed over to you according to the definite plan and foreknowledge of God, you crucified and killed by the hands of those outside the law. But God raised him up, having freed him from death, because it was impossible for him to be held in its power.

For the story of Christ's death is the story of human restoration to God by means of Christ's ultimate sacrifice, and especially as this led the way to his resurrection, and the covenant that was made with Christ whereby many would be restored to God and set free of the fear of death itself. Thus, the designation "Good Friday" for the day the church remembers Christ's crucifixion.

Belief in God is more than justified, and even desired, if it is the basis of a new hopeful perspective in suffering. And by this, we certainly do NOT diminish the real grief, and even justification for grief, whenever we encounter pain. We are told that Christ wept and was deeply troubled at the death of his friend Lazerus. But it was also the occasion for hope in so far as Christ announced his promise of being "the resurrection and the life.

In closing, here is the way C. Lewis responded to the "problem of pain," very much along the lines of what we have been saying here. Beyond all doubt, His idea of "goodness" differs from ours. By the goodness of God we mean nowadays almost exclusively His Kindness. What would really satisfy us would be a God who said of anything we happened to like doing, "What does it matter so long as they are contented? Kindness, merely as such, cares not whether its object becomes good or bad, provided only that it escapes suffering.

It is for people whom we care nothing about that we demand happiness on any terms. If God is Love, He is by definition, something more than mere kindness. And it appears, from all records, that though He has often rebuked us with contempt, He has paid us the intolerable compliment of loving us, in the deepest, most tragic, most inexorable sense. The problem of reconciling human suffering with the existence of a God who loves, is only insoluble so long as we attach a trivial meaning to the word "love" and look on things as if man were the centre of them.

Lewis, The Problem of Pain. Powered by Church Plant Media. How can I believe in God?

Darwinian evolution and God? What is a Christian? Is Jesus the only way to know God? How can I reconcile belief in God with suffering? Is the church necessary? What are the marks of a healthy and holistic Christian? How can I get involved at CPC?